Our News |  Campaigns |  Releases |  Other Events

Luminopolis is a magickal indoor festival organised by our community for our community aiming to inspire, uplift & unite. We grew from The Synergy Project. We are now Luminopolis, City of Light.

We are currently taking a break from our Luminopolis duties, but hope to see you again at one our events in the Autumn. Stay tuned for further updates. Together we shall continue to define the cutting-edge of conscious events and counter-culture community celebration.

The Summer sunshine continues, so we thought it was about time to recommend some fantastic upcoming events, music releases, and important campaigns that may interest and enchant you over the coming months.

But first, with sadness we tell you that Luminopolis regulars Szara Bakri and Holly Eatwell have both died. Szara was born with Crigler Najjar type 1, an extremely rare genetic defect, and died on May 24th. Holly contracted a rare and aggressive form of cervical cancer late last year, and died last Saturday July 4th. Both were just 21. We are grateful for having known these beautiful free spirits who embodied the essence of Luminopolis, and our thoughts are with their friends and families.

With light, love, and fulfilling experiences…
The Luminopolis team.

WorldShift 2012 – Solutions for a Global State of Emergency

WorldShift 2012 is a global movement dedicated to co-creating the foundations of a peaceful, just and sustainable world by the end of 2012. It draws attention to the global state of social, economic and environmental emergencies we now face. It proposes a series of actions and solutions to help humanity deal with the problems we may encounter.

On 999 Day (9th September 2009), WorldShift 2012 will be inviting 32 of the world’s most influential thinkers, scientists, and opinion leaders to declare a global state of emergency. This will act as the wake up call to shake us out of our “Business As Usual” mind set and begin a “Time Transition” to a more sustainable state of being.

Further initiatives are planned including an involvement in COP15 (the forthcoming UN Climate Change Conference); a multi-million pound investment fund for triple top line startups (organisations that are sustainable in terms of people, planet, and profit); and a grant-giving philanthropic fund for not-for-profit organisations that work in related fields.

For more information, and to add your name to the Declaration of Global Emergency, visit worldshift2012.org

TckTckTck – Time is Running Out for The Climate

Climate change is putting life on earth in peril. There is still time to build a greener, safer world. But the clock is ticking. In December world leaders will meet in Copenhagen to decide our destiny. If enough people from around the world show support, our leaders will have the courage to act. Add your name to the call for a global deal to save our planet from catastrophic climate change…. tcktcktck.org

Indonesia is in the process of sacrificing its great island kingdom‘s most important treasures – the last of its unique rainforests – for more toxic palm oil monocultures on stolen lands. Please express your opposition… www.regenwald.org/international/englisch/protestaktion.php?id=433

On 9 July 2004, the International Court of Justice (ICJ) ruled that the Separation Wall being built by Israel in the West Bank is illegal. Yet five years on Israel continues to build the Wall in defiance of international law and global outrage. Take action now by urging your MP to demand that the UK government suspend trading preferences which Israel enjoys under the terms of the EU-Israel Association Agreement… www.waronwant.org/campaigns/fighting-occupation-in-palestine/extra/action/16621-take-action-against-the-separation-wall

The Synergy Centre For Infinite Possibility

There is nothing wrong with our world, we are just having a weird conversation. Reclaim the conversation… www.infinitepossibility.org 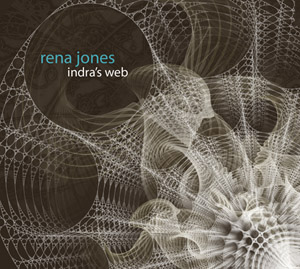 In Buddhism and Hinduism, Indra’s Web is a profound metaphor for the structure of reality, representing the interconnectedness and interdependency of all things, describing a rich and diverse universe where infinitely repeated mutual relations exist between all its elements and entities.

Through her composition, Rena creates a musical metaphor of this philosophy exploring a concept of repeated modalities similar to that of Stevie Wonder’s “the Secret life of Plants”, while skilfully taking full advantage of the capabilities of modern digital sequencing software to create complex and playful glitched out grooves and transcending some of its limitations by using the warmth and depth of analogue sound.

In this concept, she presents different, yet interconnected themes that repeat themselves throughout the album, making it flow as one unique piece of modern classical electronic music.

Everyone’s eyes will be on London in 2012. This is our once in a lifetime chance to come together to make a positive difference, and to show the world that Britain is leading the fight against climate change.

Cap’n John Crow, aka John Constable, performs poems and songs from The Southwark Mysteries – inspired by the history o’ Bankside and the Liberty o’ the Clink… wi’ Bosun Niall McDevitt, Liza Hayden and other bucaneer poets o’ the London performance scene. Tom Baker (The Bohemianauts) will squeeze ‘is box and spit ‘is own dark ballads. There be ‘Spit Yer Piece’ floor spots to speak yer favourite nautical verses. There be sea-shanties, street-songs and ‘The Ballad of Mary Overie’ for scurvy sea-dogs to sing along to. And a barrr servin’ up tots o’ grog and wine! Optional fancy dress-code: pirates or tarts (Winchester Geese).

The Crow’s Nest is featured in the London Bridge Festival: www.londonbridgefestival.com
for more on John Crow: www.crossbones.org.uk

As well as DJ sets from Rich Morley, Fluffy Lynn, Peter ardron and Sean Spindrift, Native Horizon will be performing tunes from their debut EP released last month on BinglyBongly Records. Come and see them now before they get famous and it costs a zillion pounds to see them live 😉

The Battesea Barge is a great little venue tucked away on a barge on the Thames, not far from Vauxhall Station and it’ll even be family-friendly, with free entry for under-12s. It’s also a restaurant so you can get yourself some grub to keep you going throughout the day.

See www.binglybongly.net for info and tickets

Our current parliament is failing to respond to the Climate Emergency. We will convene an alternative parliament to respond with the degree of urgency required.

The Bills before Parliament will include measures for :

Come to the People’s Parliament ! All are welcome – just turn up and take your seat ( er…..on the pavement) Hear about what we could be doing in the UK now to avert climate catastrophe – and bring your own ideas !

The July National Gathering is taking place in London, home of European carbon trading and much of the Thames flood plain! We’re working on getting all the information together for the gathering, so put the dates in your diary and watch this space… climatecamp.org.uk

Cross Bones Vigil and Ceremony @ 7pm 23rd of each month

To honour The Goose and the outcast dead of Cross Bones Graveyard. Gather from 6.45pm in Redcross Way outside the Memorial Gates.

The Gates, now a shrine hung with ribbons and mementos, are in Redcross Way, SE1, opposite the Boot and Flogger, just north of the junction with Union Street. Nearest tubes Borough or London Bridge, 5 minutes walk away.

John Crow’s first encounter with The Goose spirit at Cross Bones was on 23rd November 1996. On that night she revealed The Book of The Goose, the first transmission of her secret teachings which grew into The Southwark Mysteries. On the 23rd of every month, to maintain the transmission, Friends of Cross Bones read selected verses from The Southwark Mysteries and perform other simple rituals to honour the outcast – dead or alive. Everyone is encouraged to bring tokens and totems of beauty and truth to tie to the gates as offerings, and to gather in good time to gather our minds in stillness for the commencement of the ceremony on the magic stroke of 7…

Isis- Magdalene Festival at the Cross Bones Shrine.
To celebrate John’s birthday and Mary Magdalene’s feast day (July 22nd), and the ancient Egyptian festival. Bring ‘… your hearts, your flowers…’ jewelry, ribbons and totems to tie to the gates ‘… your hopes, your dreams…’

Borne out of Glastonbury’s green fields, Big Green Gathering celebrates their 15th Anniversary this year with an action packed 5-day event. BGG HQ can reveal legendary author Howard Marks will be stopping by the Speakers Forum to deliver one of his infamous live shows alongside and another new addition to the line up is Rodney Branigan; a multi talented musician who has been making waves with his unique techniques of playing 2 guitars at once and percussion with his feet.

On Sunday 2nd August hundreds of farmers will join the 15,000 strong festival crowd to attend the national sheep shearing competition, held on the organic Fernhill farm to mark their annual highlight! Here is a taster of the bursting line up in store this year…

Big Green Gathering is less than one month away and we can’t wait to get back to the garden, bring it on!

All powered by the wind, the sun and the people….

See http://www.big-green-gathering.com for info and tickets.

Off-Grid is a deep exploration of community living, creativity and consciousness produced by the Sunrise team. Learn to generate your own power, Eat from nature, sit in ceremony, design the future, walk on hot coals and move beyond your perceived limits. Marvel at earth’s mysteries, Rebirth your wild side. Evolve and revolve around love, celebration and joy. 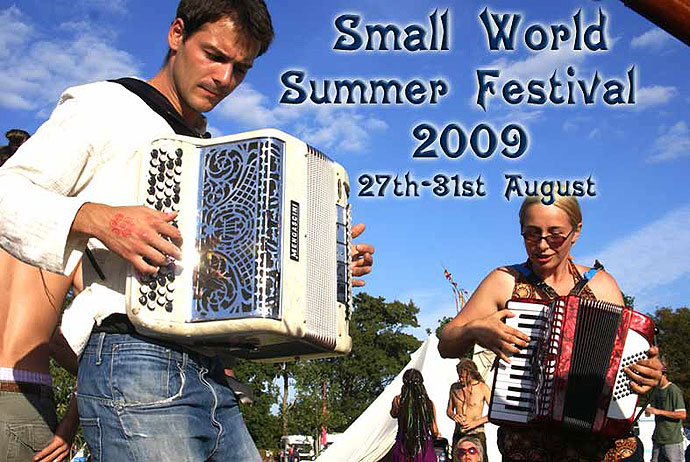 Visit www.smallworldsolarstage.org for info and tickets.

TAKE BACK THE POWER

This year Climate Camp heads to a green space somewhere on the outskirts of London. Our focus? The City of London, the financial system, and all those responsible for the economic and ecological crises.

Climate Camp is a fast-growing, grassroots, non-hierachical movement of diverse people concerned about Climate Change. At camp we live, eat, work, and learn together. With your help we can make 2009 the year we reach tipping point in awareness and action over Climate Change.

We plan to gather and swoop in together to build another world, powered by the wind, the sun and the people. Come share your energy, time and skills to make it happen. Build marquees, compost loos, field kitchens, social networks – and your own growing sense of empowerment.

Circus2iraq are having a fundraiser event for youth projects in Gaza on the 9th October at Scala in London… Keep an eye on www.skandalous.org for details.