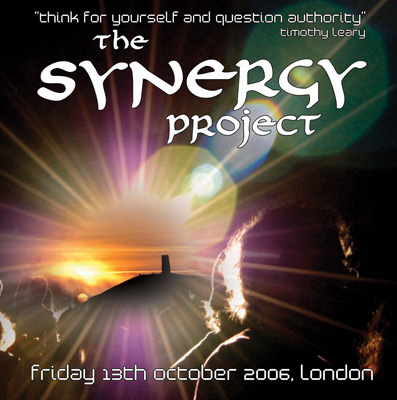 The dynamic collective of the Synergy community returns to bring together the many inspired souls of today, to celebrate a better world for tomorrow.

Synergy is a magical indoor festival, combining musicians, Djs, Vjs,performers, and artists from all corners of creativity, joined by various proactive NGOs and charities.

Synergy strives to create an optimistic approach in raising awareness on the many crucial issues affecting our world today. The events gather some of the UK’s leading creative multimedia organizations supported by international NGOs such as Oxfam, Survival, Speak, Greenpeace, Arc, and Campaign Against Climate Change, to provide just the right mix of open hearted enjoyment and meaningful reflection for a new direction.

And here are the key players:

In the main room…
Psycle

In the Blue Arches…
Liquid Records

“Liquid Records, rock and roll but not as you know it”

In the Red Room…
Peace Not War

Formed in 2002 to produce a big name fundraiser for groups opposing the
IRAQ War, Peace Not War has since evolved into an independent peace
movement co-operative that runs festivals, club nights and gigs of all
flavours. From Bashment to Bangra, Folk to Jungle and Hip-Hop and
of-course a few acoustic guitars. Peace Not War brings to you a range
of international music with a message.

In the White Room…
Small World

Welcome to the Sangita Sounds space,
where once again we marvel at the infinite variety of beautiful music
and art. It is our pleasure to share the spiritual energy of the earth
and the cosmos, through the magical music and art of our assembled
musicians, producers, DJs, dancers and artists. From the luscious,
sweet toned Classical Indian flute of Ashok Kumar, to the Mystic depths
of sound explored by Greg Hunter, we invite you into the Heart Cave.
With en eye on the infinite, let us explore together the web of
humanity that binds us and unites us.

Bindoo Babas
the last gig of the year in the UK for these spiritual groovers, playing their unique style of gypsy reggae

The event will host a series of
presentations by various speakers on different aspects of Timothy
Learys life, his ideas, and his influence on the Alternative Culture.
Followed by a debate on whether his ideas on psychedelics help or harm
the counter culture.

“TUNE IN TURN ON DROP OUT-DATED PARADIGMS” A TRIBUTE TO TIMOTHY LEARY, 10 YEARS AFTER HIS DEATH.

HOST: GOODJEFF LASTER
WELL KNOWN RADICAL ACTIVIST FROM THE SIXTIES, WHO SPECIALISES IN CREATING ‘INTELLECTUAL HAPPENINGS’ FOR THE PRESENT DAY COUNTERCULTURE DEBATING ISSUES OF RELEVANCE FOR THEM IN RAVE AND FESTIVAL SETTINGS..

Talks segment will be in two parts:

SUSANNA LAFOND is a veteran RainBow Warrior and radical activist who
helped scatter the ashes of Tim Leary on Glastonbury Tor. Video footage
of the event will be presented. She will speak about the growth of the
alternative hippie culture and how Leary impacted on that.

BRIAN BARRETT was a legendary character from the Beat Generation who
was Tim Leary’s best friend in Europe, and has unique insight into Tim
Leary’s life as well as insightful views about psychedelics. He is
author of THE ROAD OF EXCESS which chronicles his adventures with Tim
Leary.

JOHN HIGGS is the author of an inspiring new biography of Tim Leary
called I HAVE AMERICA SURROUNDED and will read abstracts from his
book, show video footage, as well as take questions about Tim Leary’s
life and ideas.

JOANNA HARCOURT-SMITH is best known as the ‘wife’ and companion of Tim
Leary. She is also a writer and thinker about spiritual issues and
hosts the META-HISTORY PROJECT. Joanna will talk about her life with
Tim Leary and take questions from the audience.

The panellists and audience will examine the ideas of Leary in context
of the reality of psychedelic drug use by the alternative culture from
the 60s until now. The panel will comprise the previous speakers plus
special guest experts on psychedelics and psychedelic usage.

The debate etc will take place in the deep blue arches, which will be hosted by Sangita Sounds.

To find out more about Timothy Leary, please visit:

The Synergy Project will also continue to support its NON-SMOKING
initiative in some areas of the venue. We hope for your understanding
and collaboration.

Glow toy performances throughout the venue by Jedi Jugglers