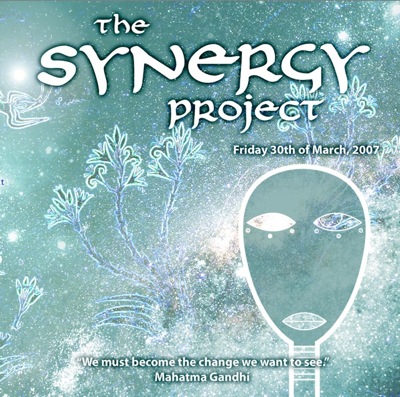 The dynamic collective of the Synergy community returns to bring together the many inspired souls of today, to celebrate a better world for tomorrow.

Synergy is a magical indoor festival, combining musicians, Djs, Vjs, performers, and artists from all corners of creativity, joined by various proactive NGO’s and charities.

Synergy strives to create an optimistic approach in raising awareness on the many crucial issues affecting our world today. The events gather some of the UK’s leading creative multimedia organizations alongside international NGO’s such as Oxfam, Survival, Speak, WWF, Greenpeace, Arc, and Campaign Against Climate Change, to provide just the right mix of open hearted enjoyment and meaningful reflection for a new direction.

This new event will host an incredibly varied mix of different elements:

In the Grey Room…
Kundalini

A musical journey from progressive trance to its obvious conclusionFull on power with cosmically enhanced vibrationsinward, outwards, onwards and upwards.

Soul resonating multi media environment on the night provided by the Extra Dimensional Space Agency and Saucereyes, with the love and light concept

An opportunity for unity expression and oneness on the dance floorlift off!

MANMADEMAN
***LIVE***
Previewing tracks of the incredible new unreleased album, get ready for the surprise of the year!
www.manmademan.com

Art sculpture and Installations by:

In the Blue Room…
ID Spiral

IDSpiral – awaken the dream – a calling to stir the most gentle part of your soul with the power of ambient art – in all its multifaceted dimensions. IDSpiral have long been experimenting with creativity as the key to a magic connection of the individual and our source, our origins. We intend to switch you on rather than allow you to turn off – so needed in out times of mainstream mass hypnosis

MIRROR SYSTEM
***LIVE***
(A-Wave-UK)
aka System 7 – chilled – Steve Hillage and Miquette Giraudy pouring all of their impressive knowledge into the art of chillout – expect some fine moments
www.myspace.com/mirrorsystm

I AWAKE
***LIVE***
(Ghostfriend-Sweden)
Neo ambient producer I Awake crafts his way through astral soundscapes and parallel lives, blending styles and flavors in search of the very moment.
www.myspace.com/iawake

KRISTER LINDER
***LIVE***
(Ghostfriend-Sweden)
Performing Songs From The Silent Years is a collection of gems from one of the most beloved, lost sons of Sweden – gentle vocals and ambient spheres.
www.myspace.com/kristerlinder

Lucidia – the radio of love returns with poems from the heart

Hard Rain takes us on a journey through tropical rainforests, man-made deserts, across mega-cities and peasant villages and into communities of indigenous people living in the most remote habitats on earth. It will inspire participation in the complex debate about climate change, poverty and environmental destruction. A touching piece of work The show starts at 0.45am

DANCING the INVISIBLE (D.I.) – D.I. is a synergy of the polarized fields of art and science.

An EEG monitor and brain interface measures the dancer’s brain signals, animating the internal workings of her mind and body through sound. The projection of the EEG waves affects the infinite loop of the camera feedback component. The dancer’s movements provides a three dimensional screen, which sculpt these elements.

D.I. emphasizes the importance between the internal and external. As the dancer interacts with the technological processes a state of chaos ensues. When the dancer begins to intuitively navigate the parameters, a sense of coherence and flow emerges, redefining order from the chaos she created. The self surrenders and the physical body seem to disappear. None of the elements that create this hybrid piece then leads the other. The polarized elements communicate in an interconnected way. This project focuses on an awareness and understanding of the interconnected nature of life.

The intent is to focus on the present moment and how that moment dictates the next. Through greater consciousness of this process we may sculpt a more harmonious reality. The more we understand ourselves the more we understand our relationship to our environment and the better able we are to find the path of equilibrium. What we do now affects what happens tomorrow.

A mix of wild, wonderful live music and cheeky DJ’s
A brew from the global musical melting pot.
Distilled at festivals and parties throughout the UK.
Heart-warming and very infectious

KISSMET(Live)
Electrifying Bhangra-Funk-Raag 6-piece
Stormed the room from front to back last time out
www.kissmet.co.uk

weaving it all together:

Led by drummers from World of Rhythm (TBC)
www.worldofrhythm.co.uk

We are Skandalous! A party crew who know the true meaning of the word! Formed after a chance meeting of clowns in the Middle East in 2003, the mission has been to raise money for Boomchuka conflict zone circus, actually touring Palestine as we write…

Skandalous! perform random acts of senseless beauty in muddy fields, where?houses, squats, the desert, and posh places like what this is. @ Synergy Matthew Skandalous! is joining forces with Abradacabaret to bring you a heady mix of beats breaks bass burlesque and badgers pole dancing, with a stunning circus cabaret show …

ABRADACABARET
between 11 and 1.30 am, featuring the spectacular Actobats ‘Cheeky and Nosy’ in Lost in Translation, Natalie, with her astonishing handstand feats, trapeze acts, magic and much much more!

Tribal Vibrations runs events in support of the human rights and autonomy of indigenous communities around the world.

The Bushmen of the Kalahari won a landmark victory in December last year, they now want support in rebuilding their lives in the Central Kalahari Game Reserve.

The Great Dance.
Follow the Bushmen on a hunt in the Kalahari,

‘ILLUMINATIONS PAST PRESENT AND FUTURE’

Robert Anton Wilson Tribute: The literary genius of the Counterculture has passed on to another reality and we commemorate him with a tribute featuring maverick director Ken Campbell, the director of the play Illuminatus, adapted from Wilson’s brilliant epic work, The Illuminatos Trilogy.

Ken will talk about both the Wilson the man and Wison’s work. Other guests include veteran theatre actor Chris Fairbank who will read parts of speeches from the play. If one man could be said to have put together all the best ideas of the Counterculture, that man was Robert Anton Wilson and we will gather to wish him the best of journeys.

The Future Of Alternative Clubbing Symposium: This featured discussion will be one of the most unique events in clubbing history, Alternative or Mainstream. Organisers of several past and present Alternative clubs will be on stage talking about the ins, outs, ups and downs, highs and lows of the clubs they have been involved in. The long and wonderful journey of Alternative Clubbing will be examined by the people who helped create it, and the Synergy audience will be welcome to join in that examination. Out of that dialogue will come glimpses of the future and how we will party.

Guests featured will include the legendary Fraser Clark, creator of the Mother of all Alternative clubs Megatripolis as well as the trendsetting Warp Experience, Sionaidh Kraigen (Megatripolis), the woman described as the Muse of the Alternative Clubbing scene, Richard and Mary who created and still run the wonderful Whirl-Y-Gig, Jeff Dexter who managed the legendary ‘Roundhouse’ in the late Sixties/early 70’s, Mark Heley who brought the English rave scene to America, running ToonTown in California in the early 90’s, and the Original Co-founders of Synergy itself, Dominik Spiral and StevePeake. Plus other surprise guests. This is a Don’t Miss event!

You will be taken on an exploration of the issues confronting Indigenous communities in this day and age and how we in the UK can help. Speakers will be posted on the Synergy website and a night of Indigenous Tribal Music and Entertainment will begin immediately after the last talk ends at 1 am.

Host: Jeff (‘GoodJeff’) Laster specializes in organizing Talks and Discussions relevant to the Alternative Culture. He has been involved in the Alternative scene in both America and the UK since the late 60’s and worked in English Alternative Clubs since the mid-90’s. He has been called the ‘Kilroy of the Counterculture’ by Time Out magazine and his passion is to ‘edutain’ the CounterCulture and Rave Generation with challenging political, cultural and spiritual events.

Led by drummers from World of Rhythm (TBC)
www.worldofrhythm.co.uk

and of course once again the incredible popular

***
SYNERGY – INCLUSIVE TO SMOKERS AND NON-SMOKERS ALIKE
As most of you will know Synergy is one of the pioneering clubs that supports the peaceful (and healthy) coexistence of smokers and non-smokers alike. To this effect we are designating large areas that are clearly marked as non-smoking. We have received much support for this attempt – thank you to all who help us achieve this not always easy goal.

Glow toy performances throughout the venue by the Jedi Jugglers
www.jedijugglers.co.uk

Starting at 10pm and finishing at 8am

The venue is the SeOne Club, Weston Street, London Bridge

Advanced tickets are available for £15 plus booking fee from our website or for £20 on the door, £15 concessions are only available on the door with valid proof

Please bring ID if you look like you might still be in your teens
Please also do not buy from ticket touts!

Online tickets are available via the online shop @
https://thesynergyproject.org or also www.accessallareas.org

Or if you just want to become a friend of Synergy, join us at www.myspace.com/thesynergyproject
We are happy to meet you! =)

This document has been edited with the free version of the instant HTML converter tool. Try it here and use it every time for your projects.