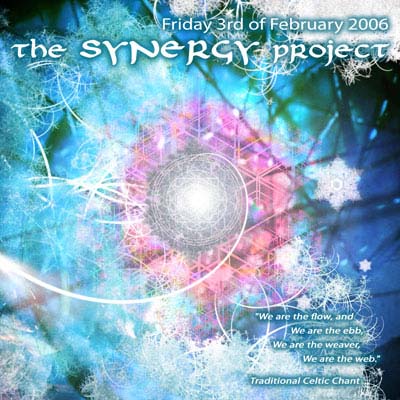 Once again we open our doors to welcome revellers of all ages into the communal fold, presenting a diverse and creative show for which Synergy has become so renowned.

The Synergy Project was sparked by a desire to create events that harness the power of celebration as a means to inspire a challenge to many aspects of mainstream materialist lifestyles, not least the way we live and work together as individuals and our relationship with each other, the planet, and the wider cosmos.

Firstly, however, apologies to everyone who was made to wait considerably during the beginning of the night. We work as hard as we can to speed up the queues and once again we will make some improvements for the next event!

Once inside we would hope you will agree that all rooms work a treat – each one with their very own flavour.

Below have a look at the lineups from the following rooms:

in the Main Room…
Liquid Connective & Inside us All

Presented a room of uplifting and textured electronica plus breathtaking visuals:

in the Cream Room…
Peace not War

Peace Not War presents a night of cultural resistance to the New World Order and the state of permanent war that our governments are determinedly pushing through. Encouraging people to realize their own power and maintain the bravery required to speak down the oppressors of mankind, the producers of the International peace movement CDs will be joining forces with many of our friends from the demonstrations, including the Samba band and the rolling sound system.

Artists making the stand will include:

Hosted by Spacegirl and The Rub
Visuals by Nuroptics, Eugenia

in the Blue Room…
The Ceilidh Project

The Ceilidh Project revives the magic of a traditional ‘ceilidh’ format with an injection of high energy acoustic dance bands. We welcome you to drop in to our dance workshops and we’ll teach you the moves! Or just come to listen to the bands and do your own thing, but we think you’ll have more fun if you join in.

The Committee Band
A whopping 10 piece ‘wall of sound’ that will lead you into a ground-breaking ceilidh workshop.

Dark Angel
Global Roots and Jazz to keep you on the boil.

Mudra (IDSpiral)
Wind down with deep chill with a hint of eastern European flavour.

Moredekkers
Foot stomping folk with a twist of drum and bass, just come and
free-style!
Folkus
Eclectic mix of funky folk from the British Isles and beyond.

Decor
A debut for Duolu who have created beautiful artwork inspired by our
workshops.

in the Red Room…
Family Gathering

Family Gathering are the creators of 2006’s Sunrise Summer Solstice Celebration. They hosted a room of
enchantment where myth, magic and music meld together, where worlds meet, where sounds, smells and visual splendour regale you from every direction.

The room featured a large Yurt creating an intimate venue and a feel of the festivals.

in the Deep Blue Room…
The Tribal Voices Space

Tribal Voices’ is a collective of acoustic musicians, bound by a belief in nature and community. Many of us have been inspired by the campfires of the Twyford Down, M11, Solsbury Hill, Newbury, Fairmile and many other road protest camps of the mid 1990s, coming together as one people to fight against the destruction of our common heritage. Our sacred sites, hallowed hills and ancient forests are under constant threat from modern lifestyles, consumerism, “growth”, building, fast cars, new roads, pollution and destruction.

Ours is a multicultural, living tradition, not bound by mainstream views. We are a family on the frontiers of something new, a community of mutual understanding taking collective responsibility for the future. We are a bunch of dreamers who believe dreams can become manifest in a world where we are one with all things.

The Tribal Voices reunion took place in the deep blue arches of the SeOne where you could also find our usual healing area / alternative means to soothe into your night.