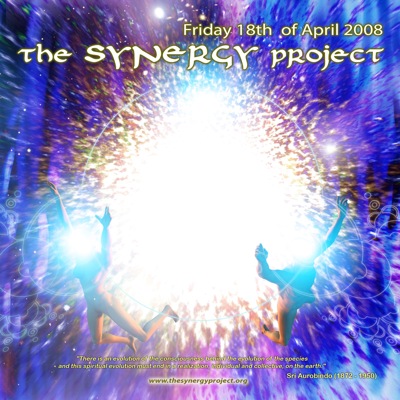 Synergy is a magical indoor festival, combining musicians, DJs, VJs, performers, and artists from all corners of creativity, joined by various proactive NGOs and charities with the expressed aim to make a difference.

Synergy strives to create an optimistic approach in raising awareness on the many crucial issues affecting our world today. The events gather some of the UK’s leading creative multimedia organizations joined by international NGOs such as Oxfam, Survival, Speak, Ecoshelter, Greenpeace, Campaign Against Climate Change and many more.

Throughout the venue you will also find : charity stands, workshops, talks/debates, healing areas, organic cafes, and the friendliest vibe in London!

Events4Change is social enterprise born out of an alliance between various forward thinking organizations with expertise ranging across all aspects of sustainable / educational events production and promotion, arts and artists management, sustainable energy, technology, and development, fundraising and networking within the charity and not-for-profit sector. At this next event they join forces with the Nu-School Hippies collective bringing to the Synergy dance floor some of the most cutting edge Producers n’ Djs of the UK and US west coast electronic music scenes, exploring a wide range of sounds crossing over Nu-Breaks/Psy-Breaks/Electro/TechFunk/Dubstep and more…

The first full progressive feast at Synergy will be hosted by two of the UKs finest music and production teams, Liquid and Furthur Project. Both will launch their fresh new progressive sounds of their forthcoming releases, combined with some of the most spectacular video and decor creations from partners Inside-Us-All and Fluffy Mafia… Expect a phat drop of the good stuff and an explosion of musical-youth and vibe.

Two of the UK’s finest festival shows, together, in one room.
The best festival bands, cheekiest dj’s, cabaret and walkabouts.

Save Tara
Peaceful direct action to save the historic Irish valley from eradication
www.savetara.com

in the Blue room…
binglybongly

An enchanting world of relaxing grooves, visuals and positive vibes to inspire and energise. binglybongly was established in 2001 to promote better living through positive, energizing music of many genres.

At this next event we will inaugurate the birth of the Synergy Inspiration Hall, a space were you will be able to escape from the big sound systems and explore the Healing Area, the Synergy Art Gallery, the Talks & Debates, Theatre / Poetry performances, Sustainability Workshops and late night Acoustic Jam sessions. We hope that in this space you will be able to interact, learn, teach, and inspire, or be inspired by many other Synergy goers to make a difference!

11-12pm The Synergy Activist Hour: ‘SOMETHING IS HAPPENING HERE’….
The first part of this hour will focus on the upcoming alternative FESTIVAL season and what will and won’t be happening this year. Featuring Sunbird from WaveForm, Susanna Lafond from the Big Green Gathering, Andy Smith from Festival Eye Magazine and others. The second part of this hour will feature an update on the HEATHROW anti-3rd Runway campaign with activists who have been directly involved in the recent protests. There will also be discussion on the recent Tibet protests. Host: Eddy Crystal.

Midnight-1.30am Debate: 1968: STREET FIGHTING YEAR: Did the 1968 political protests and cultural upheavals have a positive or negative effect on both mainstream society and current political and cultural activists? What are the lessons to be learned? We will commemorate the 40th anniversary of the Grosvenor Square riots and 1968 in general with a panel of 1968 radicals and current activists including Ian Bone, (founder of Class War and author of ‘Bash the Rich’) and Karen Moller (author of ‘Technicolor Dreamin’), Jon Fenton (radical musician of the time), Katrina Forrester (activist in ‘Plane Stupid’), and Chris Mounsey (founder, Libertarian Party). Host: Jeff Laster.

4am Presentation – Know Peace – The hip-hop bard presents his experiences of living as an eco-warrior in Tasmania’s amazing remaining old growth rainforest
5-7am Open Mic: ‘WE ARE THE CHANGE’ – hosted by Viziondanz and Perciphone. Calling all your children hiding out inside your adult bodies! What would you say/give to our world if you KNEW you wouldn’t be judged? We ARE one, separated physically in such a way, that we all get to find out a littleabout what it is to be a human BEING. By pooling all this information, we get to see the bigger picture.
Every single one of us counts – our every view and idea. We seek to provide a safe environment to express what’s really on your mind and in your heart – a place to experiment with who you ARE. Come and Dare to Share and show you Care at this unifying event in the Inspiration hall at 5am.

1.30-3am Synergy Tranceformation Theatre: 1968: STREET FIGHTING MAN…. Following the debate about 1968 and its upheavals, we will launch Synergy Tranceformation Theatre by exploring the events of that seminal year in an insightful improvised drama. 1968 radicals and current 2008 activists will meet up in what is not only a political history drama but a look into how time affects us all, even in the radical counterculture. Zoot Lynam, co-founder of ‘Melting Pot’, Britain’s premier improvised drama company will direct himself, Eddy Crystal, Rebecca Shanks and others in the first ever improvised drama at Synergy.
3-4am ‘E’ FOR ENLIGHTENMENT: The ‘What is Enlightenment?‘ group focalised by Jody Patterson comes to Synergy to help us all get a bit closer to the big E through the teachings, meditations and spiritual rituals of Andrew Cohen. This will be in the form of a spectacular multi-media visual, sound, and dance presentation.

Starting at 10pm and finishing at 8am at the SeOne club, Weston Street, London Bridge.
Limited number of cheaper advanced tickets are available for £15 plus booking fee from our website until Sunday the 13th of April, or for £20 thereafter and on the door, £17 concessions are only available on the door with valid proof.
If you do not have enough money for the ticket please get in touch with us and find out how you can get involved =)

Please bring ID if you look like you still might be in your teens.
Please do not buy from touts – you will not be admitted.

Online tickets are available via the online shop at
https://thesynergyproject.org or www.accessallareas.org

Or if you just want to become a friend of Synergy, join us at www.myspace.com/thesynergyproject.
We’ll be happy to meet you!

and don’t miss the:

Check out this new venue in the heart of Camden. Born out of the fold of the Synergy Project and IDSpiral, this inspirational space offers some of the finest visionary cuisine, raw food treats, super foods and an all organic cocktail bar. Its a space to hang out, bring your kids, work away on your laptop and exc