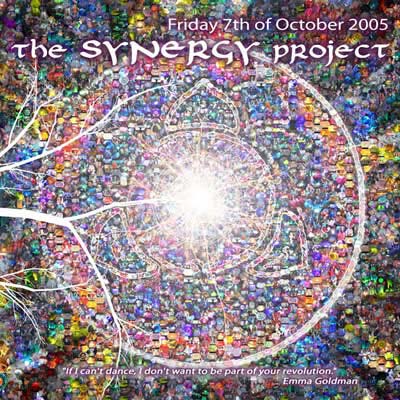 London’s leading conscious partying organisation returns from the festivals to celebrate the opening of the new Synergy Centre in Camberwell, a new focus for training, mutual support and collaboration for London’s creative and campaigning underground.

Since its launch in March 2002, Synergy has established itself as one of the most diverse, creative and progressive club nights in the country, with an eclectic mix of psychedelic trance, live festival bands, performance poetry, dance, conscious video installations, healing areas, wholefood cafes and information stalls from leading non-governmental organisations campaigning for social and environmental justice. With a strong non-profit ethos, uncompromising production values and some of the friendliest, unpretentious community vibes, Synergy stands apart from the stagnant commercialism of mainstream club land, fully earning the title of a vibrant indoor festival.

All profits from the night will be spent on the renovation and refurbishment of the South London warehouse space which Synergy have recently rented to realise their long-held dream of opening a centre focussing on work-based learning in the skill and technologies used in the Creative and Cultural Industries, the sector of the capital’s economy identified by the Greater London Authority and the London Development Agency as one of most vibrant and dynamic and therefore ideal for employment generation, particularly amongst London’s disadvantaged yet culturally diverse communities.

Over the years, many of the Synergy crew have managed to overcome their alienation and disaffection from orthodox patterns of employment in drudge filled nine to fives, enabling them to enter into self-employment offering considerable creative and communal fulfilment. Working with the young people of the South London boroughs of Lambeth, Southwark and Lewisham, Synergy look forward to sharing the experiences and skills to empower young people living in the disadvantaged communities surrounding the centre to set up their own social enterprises or acquire skills and experience which they can then harness to gain employment in the wider creative and cultural economy.

The opening of the centre signals the end of a long struggle that has seen Synergy emerge from the underground squatted social centre and squat party scene to gradually gain legitimacy and credibility in the eyes of the local authorities of South London. It also resonates with a broader trend whereby the protest and alternative movement, previously centred around the anti-Criminal Justice Bill and anti-roads protest movement of the early-mid 1990s, has gradually come of age, moving on from squatting to gain licenses or leases of their community premises.

This process has not necessarily been a smooth one, with some sections of the old guard criticising Synergy in particular for what they see as ‘hippy capitalism’, merely for working in an over-ground venue with its attendant costs. However, Synergy have found that rejecting the rhetoric of confrontation and exclusion in favour of engagement and collaboration has borne fruit, reaching out to communicate to new audiences and to work with new partners rather than remain isolated and irrelevant in the Green Ghetto.

Kakatsitsi, Master Drummers from Ghana, fresh from their Scottish escapades, where they led the Make Poverty History march in Edinburgh before confronting Bob Geldof about the lack of African representation in Live8, join forces with Eddy Gongman in the Indigenous People room, while the Small World stage host an acoustic healing chill featuring singer-songwriters Carrie Tree and Pink ‘n Ruby.

“fresh from the summers adventures, Liquid
Connective, community based music and arts organization, collaborate and celebrate with their affiliate organisations Liquid Records and Inside-Us-All, combining both cutting edge psychedelic trance and electronic music with conscious installation and visuals. All cradled in an awe-inspiring canopy of creation of exclusive new decorations from inhouse creators. Also for the first time ever at Synergy the dance floor will be smoke free (and whilst we realize that his is going to be quite a challenge we are hoping for all of your support and understanding)

in the Blue Room…
Turaya

Audio Visual Syncopation
Ultrasonics
Inside Us All

Photographic/Multi-Media arts installation
Documentography – a collective of international documentary/contemporary visual artists based in london. . . tackling contemporary issues through the visual medium. Including photography, independent short films and multi-media and documentary screenings throughout the night.

We have a specially selected line-up of sonic and visionary wizards to manifest a deep and luscious ambience. Global grooves merge with magic melodies in our melting pot of conscious collectivism. Join us in the Heart Cave and cosmingle with the full spectrum of holistic peace vibrations. From the Avalonian-Celtic dub of Panacea to Paraguayan Harp music with Kike Pederson, our artists, DJs and VJs will create a magic carpet ride of sound to take you on a global spiritual journey.

And in the healing arches:

Psy-baba’s especially for you, here again to enhance the party with a whole range of healing experiences. We’ll take you there and bring you back. Be relaxed and energized mentally physically and spiritually.

in the Red Room…
Indigenous People

An exploration of the ancestral wisdom of indigenous culture.

Kakatsitsi (quite big please), Master Drummers from Ghana, against a backdrop of still and moving images from the Jamestown fishing community of Accra.

Earshot Cinema – a montage of chilled beats and inspirational and provocative spoken word.

the indigenous room will feature a no tobacco policy, whilst educating about a wide range of herbal and more healthy alternatives.

acoustic and soothing
This time our acclaimed live outfit is going to womb you into its creative comfort zone, deep in the belly of the SeOne’s caverns, allowing the magic of singer songwriters to take you away on a journey of relaxation and inspiration.

With DJ Pony weaving it all together

Plus of course our as ever inspiring partners in affiliated NGOs and Charities, presenting accessible ways to stuff “that matters”