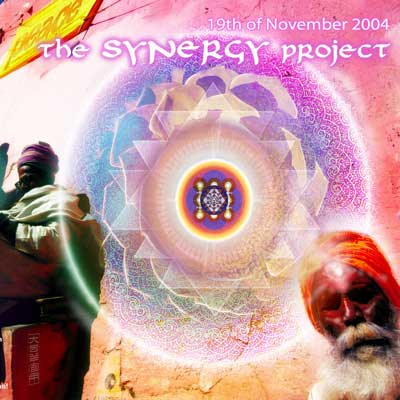 After the success of their October event, which saw 2,200 people enjoy an eclectic, multi-media urban festival, Synergy are happy to announce their last event of the year, once again held in SEOne, Londons largest club venue.

Synergy continues to go from strength to strength, with a firm foundation of financial viability in place, enabling the growing community of artists, activists, healers and cooks to devote more time and resources to realising their original intent of harnessing the power of club culture to reach out beyond the activist ghetto to spread messages about peace, social and environmental justice and global community as an alternative to war, greed and xenophobic nationalism.

Amidst the prevalent sectarianism within many activist circles, Synergy manages to bring together a wide variety of people from Londons creative underground to create a flourishing and surprisingly harmonious and professional movement for change. Holding true to their maxim that no two Synergy events are ever the same, thereby standing apart from the formulaic homogeneity of mainstream club land, the Synergy community is delighted to welcome three new production companies into the fold.

Project Ozma is a collective of DJs and VJs seeking to explore a deeper fusion between a wider variety of dance-music genres and the visual dimension of club culture. Breaking the mould of conforming to one musical genre, Project Ozma will be hosting the main dance floor, preparing a series of collaborative DJ & VJ sets themed around the concepts of Renewable Energy, The Sun, Birth, Growth & Development, Recycling and World Peace, honouring Synergys aim of pushing back the boundaries of club culture.

Festival of Flight, producers of acclaimed conscious parties in aid of Anti-Slavery International and Speak Out an event to raise awareness of non-violent conflict resolution and to raise money for Hope and Homes for Children, will be hosting Forced Out, a room of funk, urban soul, poetry, visual arts, multi-media and speakers to raise awareness of the illegal and forceful eviction of the indigenous people of Diego Garcia and of their struggle to return to their homeland.

Costa Urbana, a collective of artists from a variety of countries in the Mediterranean basin, bring a diverse array of sounds, sights and tastes with everything from traditional Middle Eastern percussion fused with digital beats, DJs from Greece, Italy and the Balkans, plus live oud and clarinet fused with Indian and gypsy rhythms and visual installations with video and slide projectors exploring the built and natural environment of the Mediterranean region.

Synergy veterans Art Nation return to the gallery space to provide an opportunity for talented yet unknown artists to exhibit their work and works with partner non-governmental organisations to present their messages in a creative way by supporting collaborations with artists within the wider Synergy community, not least the European Creative Forum and the 491 Gallery.

Finally for the more spiritually inclined, Sangita Sounds, a Brixton-based record company working with indigenous classical musicians from India, Morocco, Iran and Australia, will combine with the White Tara Healing Temple to create a space and a sound for the exploration and enjoyment of the melodies of our minds and the rhythms of our realities, with a participatory music space, ambient world-dance grooves and a wide variety of therapies including massage, shiatsu, reflexology and reiki.

Apart from one of the most friendly, peaceful and conscious crowds in London and the ever-changing wealth and diversity of the production, what sets Synergy aside from the commercial mainstream is that, rather than relying on big names to pull the crowds, the spirit of Synergy is to be found on the creative fringe – the campaign stalls, the drum circle, the whole-food cafes, the jugglers and the breadth of community participation in the production, with over 150 people, from admin coordinators to the welcome stewards coming together to put on the night.

in the Main Room…
Project Ozma

This will be the last Project OZMA for a while, so come and enjoy with us one of the most forward thinking and diverse events in the UK. Project OZMA promises a show like no other show, a unique psychedelic journey through our senses… we believe no other event in the UK focuses more energy onto the connection of sight, sound, performance, learning, scent and interaction.

The Project OZMA space will also host a great variety of charity and NGO information points. Providing some great information about projects in and around our world.

in the Blue Room…
Forced Out

The FORCED OUT room will live up to all expectations inviting both artists and audience to embrace their choice in the celebration of positive action and change. The audience will experience a room of unparalleled excellence and positivity, featuring:

 Live music by THINK and LAID BLAK, two of the biggest and best funk, urban and soul bands currently coming out of Bristol.

 Upbeat funk and groove DJs FATCAMP taking time out from their hugely popular residency at Fabric.

 And most importantly art, poetry, speakers, multi-media and visual art displays working together to promote interactive and positive education about the issue of Diego Garcia.

..So what on earth is the issue of Diego Garcia??
Diego Garcia is an island near Mauritius off the coast of Africa that used to be inhabited by a peaceful native community. In the late 1960s the entire population of the island was illegally and forcefully evicted from their homeland by the UK and US military and deported to Mauritius. It was then transformed into a military air base and is today the largest kick-off point for the military in the Middle East.

Now the people of Diego Garcia want their homeland back and are planning to take a flotilla of boats from Mauritius to do just that! They will be sailing towards their deaths – unless the word gets out about what is about to happen.

The FORCED OUT room at synergy will contain, photos, poetry and artwork from the people of Diego Garcia and there will be speakers from the community.

Who are you? Who am I? Ever wondered what you look like in your subconscious? Let your hostess with an identity crisis Tin Foil Space Girl guide you on a journey to discover your inner caricature.

Providing an opportunity for talented but yet unknown artists to show their work to the vast Synergy community and creating a space for interactive artistic expression to occur. The Gallery provides the art materials so you can express yourself in many different ways! By now almost a Synergy legend – the wishing tree – many of you have spent hours crafting your wishes before tying them on. The Gallery also helps NGOs (War on Want, Tourism Concern, The Gaia Foundation amongst others) to present their important message in a creative way by supporting artists to collaborate with them.

This time round the Gallery will present drawing classes by wendolena alongside life-size puppetry and beautiful soundscapes from Stefan 491 plus loads more to provide a light hearted look at personal development in the face of adversity.

Changing the world starts with changing ourselves, too easily forgotten in our stressful crazy world!

Artists will be supplied by Art Nation, the European Creative Forum and the 491 Gallery
To get involed email edwinarigby@yahoo.co.uk

Bring all your beautiful character anomalies and well chip of the bits you dont want, and exaggerate them to the point of derision tin foil girl

in the Cream Room…
Costa Urbana

Costa Urbana invites you to experience the Mediterranean approach to celebration. Since time immemorial the Mediterranean has provided the setting for contact and cultural exchange among people of various colours, races and religions. Unlike today, times of peace have seen people across the great Sea that connects Europe, Africa and Asia, progressing and flourishing by accepting and learning from each other. Today, the natural beauties of the coast blend in with the artificial, man-made structures of its chaotic, overpopulated and nocturnal cities. Costa Urbana celebrates the many faces of the Mediterranean metropolis setting the stage for a rebirth of urban entertainment bathed in colour, humanity and a dose of south European anarchy.

Especially for Synergy we have arranged anything from chilled ancestral tunes to the immigrant hip hop of the Med metropolis and deeper jazzy grooves, from exuberant fusion live sets to hard-beating Athens clubbing

Please note that contrary to the information on our flyer this space will be hosted by Sangita Sounds, building onto the enoumous success of the last event. More details of who is involved will be posted soon on the website!

White Tara is a female enlightened being whose function is to bestow long life, health and wisdom. The White Tara Healing Temple is a sacred space of purification and healing where people can learn about and experience different healing forms including shiatsu, reflexology, Swedish and holistic massage, thai massage, Reiki, energy healing or a Polynesian Maori massage. It is a perfect space open for people to balance and rejuvenate energy in a beautiful and peaceful environment.