At the event on the 28th April we hosted an info stall and a raffle at 5pm in the IDSpiral chillout, to raise funds and awarenss for this ambitious and important project. We managed to raise over three hundred pounds so thanks to everyone that bought a raffle ticket. Have a read of our Press Release to find out more about us:

"We are a team of ten undergraduates from the Royal Veterinary College, London. We will be going to Swaziland in the summer of 2006 to study the prevalence of blood-borne diseases in cattle, the main source of food and income for subsistence farmers, which comprise the majority of farms. According to a study conducted in 1985, blood-borne parasites such as Babesia infect more than 60% of cattle in some areas of the country, and are endemic throughout Swaziland. After infection, the parasite can kill cattle within 1-4 days. Many farmers only own a few head of cattle, so infection by the parasite can have devastating effects on small-holdings.

Our research aims to re-assess the challenge posed by and levels of infection of blood-borne diseases within Swaziland’s cattle population today. Farming methods and veterinary techniques have changed drastically over the past twenty years, and as these diseases are transmitted via ticks, they can be relatively easily controlled.

Over the past twenty years, the HIV epidemic in Africa has reached unprecedented levels. In 2005 Swaziland had the highest HIV infection rate in the world. HIV and AIDS is decimating the working population of sub-Saharan Africa and leaving families without ways of earning an income. If we can control the number one killer of cattle in Swaziland, we can help poverty-stricken families and farmers maintain a basic income and source of disease-free nutrition in what is becoming an increasingly challenging era."

Here’s a photo of us at the Synergy Project: 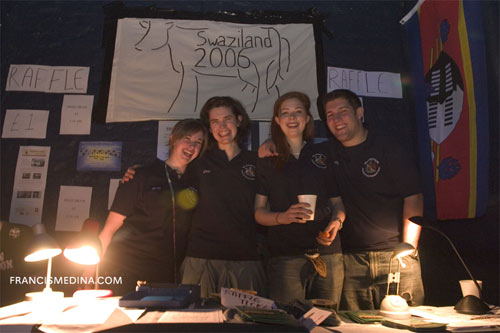